‘I Thought It Was Fireworks’, Man Caught With EID In Church Speaks 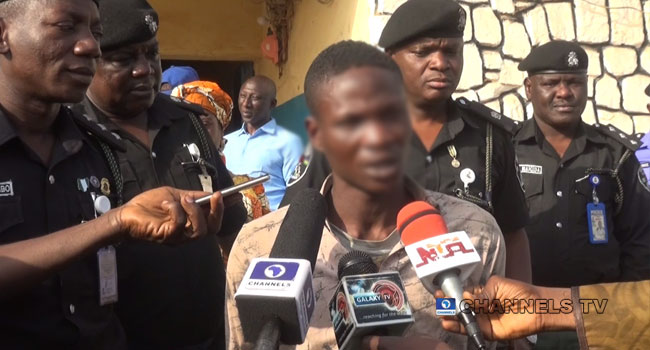 A suspect, Nathaniel Samuel, who was arrested for alleged possession of an improvised explosive device (IED) in a Kaduna church, has said that he thought the item in his bag was fireworks for decoration.

Samuel who is from Bauchi state, was paraded at the Kaduna State Police Command on Monday, was arrested on Sunday with an IED at Living Faith Church in Sabon Tasha area of Chikun local government area.

Speaking to reporters, the suspect admitted to carrying a bag containing the IED into the church but said he got the bag from a woman named ‘Grace’ from an event the previous day.

“I went to the church in the morning at about past 8 am, so while I was seating down, I was listening to the sermon from the man of God. All of a sudden I had a stomach ache, so I decided to go and use the toilet.

“When I came into the church I was holding a bag which contained some of my items, some of my documents because a day before that day, I went for an event at Ngwamboro, Sabo.

“We got it from the event through a lady I told them about and her name is Grace; when she gave it to me, I never knew what the devices were until after my bag was searched that I got to understand what they are,” he revealed.


The suspect said the police assumed that the item was explosive, “but at the long run, when they interviewed me at the police station, they discovered they are not explosives; they are mere fireworks for decoration.

Meanwhile, police spokesman, DSP Yakubu Sabo said the suspect was caught with the explosive device inside the church as the Sunday service was going on with the intention to wreak havoc before he was apprehended by vigilant security personnel attached to the church.

“This suspect smuggled into that church with his bag and placed his bag on the church chair. Thereafter, he went into a restroom and stayed there for over an hour.

“This gave the apprehension by some of the church members that were observing service and drew the attention of the policemen providing security at the church that later came in and went straight to the restroom to bring him out.

“On enquiry, he confirmed to the policemen that the items in the bag belong to him, and on a closer look, they were suspected to be IEDs,” he added.

DSP Sabo disclosed that investigation is still going on to unravel the motive of the suspect and possibly fish out his accomplices.

He urged those who are using the incident to stoke religious tension to desist from doing so and focus on the act and not the personality of the person involved.

“The police is still investigating and whatever the outcome of the investigation, we will let the world know and do the needful.

“Crime is no respecter of religion, persons, tribe and whatever a social affiliation; a criminal is always a criminal. We should always concentrate on the act not the personality of the person involved,” he maintained.
Last edited by a moderator: Feb 4, 2020
You must log in or register to reply here.
Share: Facebook Twitter Google+ Reddit Pinterest Tumblr WhatsApp Email Link