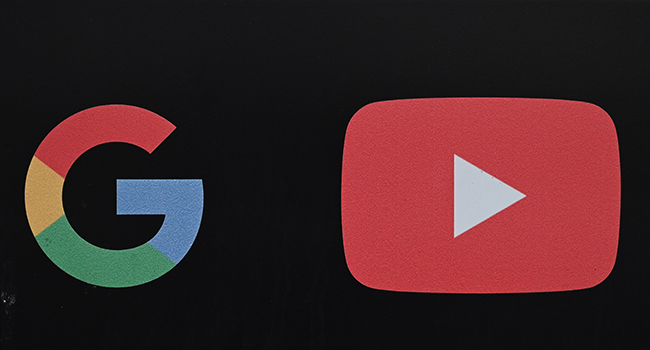 In this file photo taken on November 21, 2019, the Google and YouTube logos are seen at the entrance to the Google offices in Los Angeles, California. Alphabet is the parent company of Google and Youtube. Robyn Beck / AFP

Detailing its cloud computing and YouTube revenues for the first time, Alphabet reported that profits rose 19 percent from a year ago in the quarter to nearly $10.7 billion as revenues increased 17 percent to $46 billion.

Alphabet and Google chief executive Sundar Pichai touted YouTube as a revenue star at the company, with ad revenue reaching $15 billion last year in an increase of about 36 percent from 2018.

YouTube music and television premium services now have more than 20 million paid subscribers, according to Pichai.

Despite assurances by executives that Alphabet sees plenty of money-making potential ahead and is investing to capitalize on long-term trends, Alphabet shares slipped more than four percent in after-market trades that followed release of the earnings figures.

The California tech giant, which dominates online search and makes the Android mobile operating system, has been working to reduce its dependence on the digital advertising which delivers most of its cash.

“Our investments in deep computer science, including artificial intelligence, ambient computing and cloud computing, provide a strong base for continued growth and new opportunities across Alphabet,” said Pichai.

The company said its cloud computing services took in $2.6 billion in revenue during the last three-month period — up more than 50 percent — and nearly $9 billion for the year.

Chief financial officer Ruth Porat said Alphabet will ramp-up hiring this year. Much of that will be engineering talent for its cloud division which competes with cloud market-leaders Amazon and Microsoft.

“We are leaning into investing for longterm growth,” Porat said.

“That has been a key principle here and continues to be.”

Google advertising took in the majority of revenue at $38 billion in the quarter, and more than 80 percent of its annual revenues of $162 billion.

Colin Sebastian, an analyst at Baird, said the earnings report showed “a deceleration” in growth for Google, which may have been due to the impact of fewer holiday shopping days.


Despite that, Sebastian said he sees “no change to our positive long-term thesis” for Alphabet.

Analyst Nicole Perrin at eMarketer said the results highlight the significance of YouTube, the popular video service for which Alphabet had not up to now disclosed financial data.

“This is something investors have been looking for, but the information should also give advertisers valuable information about the importance of YouTube as a digital ad vehicle,” Perrin said.

“YouTube is growing strongly according to this report, and revenues are above where eMarketer had thought they were.”

Alphabet’s “other bets” which include Waymo autonomous vehicles, life sciences and drone delivery, took in $172 million in revenue in the final three months of the year, ending the 12 months with a big operating loss.

The results come with the company facing intense pressure around the globe over its dominance of the online ecosystem.

It also has been at the center of a dispute over tax policy for multinational firms. Global negotiators are seeking a new treaty on how to tax digital operations spanning the globe.

“It is something we always need to take a look at,” Pichai said on an earnings call with investors and others, when asked how regulatory or taxation moves could affect Alphabet’s bottom line.

“We are engaged in these issues and we anticipate and structurally work on them early on.”