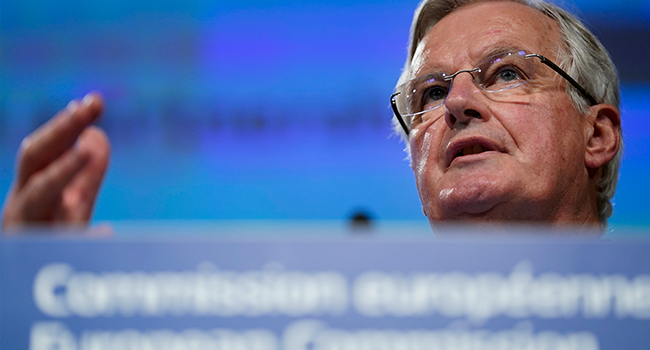 EU Brexit negotiator Michel Barnier gestures during a press conference on negotiations with UK on on February 3, 2020.
Kenzo TRIBOUILLARD / AFP

“We are ready to offer a highly ambitious trade deal as the central pillar of this partnership, including zero tariffs,” Barnier said, but warned Brussels would not accept “unfair competitive advantages”.

Barnier was unveiling his negotiating mandate ahead of talks with Prime Minister Boris Johnson’s government on the EU’s future relations with Britain after the post-Brexit transition period.

Separately, his boss, European Commission President Ursula von der Leyen, said the talks should stick to what had already been agreed in a pre-Brexit political declaration between the two sides.

“There will be no surprises. We outlined with the UK already the future parameters we will have in our negotiations in the withdrawal agreement,” she said.

Johnson was expected to present Britain’s negotiating position later Monday. Reports from London suggested he will warn that Britain seeks the right to diverge from EU rule-making.

If that was the case, von der Leyen said, Britain must not expect unlimited access to the EU market.

Barnier told reporters that disagreement over fishing was likely to be the first and most serious division. British fishermen want to bar EU counterparts from their waters, but want to keep the EU as their main market for fish exports.

“We must now agree on specific and effective guarantees to ensure a level playing field over the long term,” Barnier said.

“That means a mechanism to uphold the high standards we have on social, environmental, climate, tax and state aid matters today and in their future developments,” he warned.