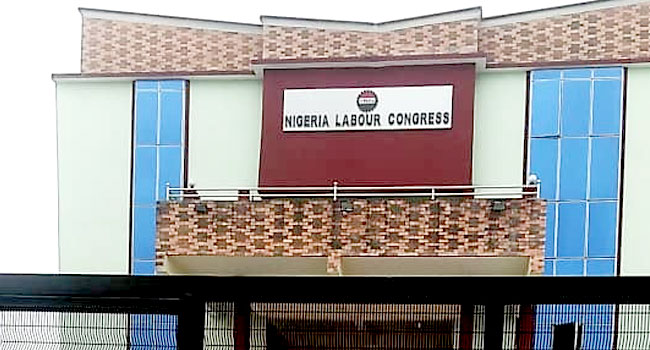 A file photo of the NLC secretariat in Port Harcourt, the Rivers State capital.

The Rivers State government has sealed the secretariat of the Nigeria Labour Congress (NLC) in Port Harcourt, the state capital.

Although both parties gave different reasons why the building was sealed, the closure was carried out by government officials on Sunday night.

The Head Bureau for Special Projects and Special Adviser to the governor (Special Projects), Alabo George-Kelly, confirmed this in a statement forwarded to Channels Television on Monday.

Before the NLC secretariat was sealed, there have been reports of disagreement between the state government and the organised labour over the failure to fully implement the new national minimum wage of N30,000 for workers. 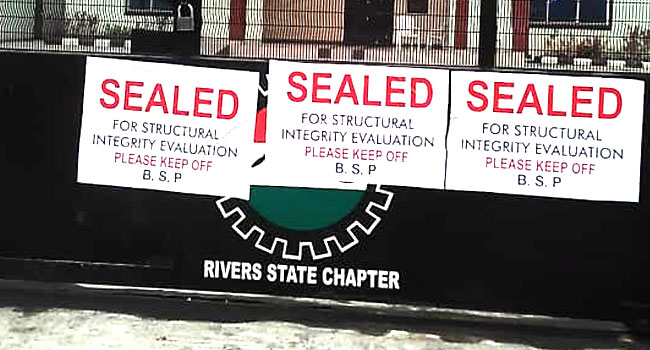 A file photo of the NLC secretariat in Port Harcourt, the Rivers State capital.

While the NLC leadership accused the government of sealing its secretariat because of the implementation of the minimum wage, George-Kelly disagreed.

He described the allegation by the labour body as frivolous, saying it was not just untrue but also a calculated attempt at misleading the public against the genuine intentions of the government.

“As you may be aware, the NLC structure which was built pro bono by the Rivers State government for labour was completed and commissioned only a few months ago by the Bureau and it is our normal practice to carry out general inspections and structural integrity evaluation or tests before the expiration of the defects liability period.

“It is this activity that precedes the release of the five per cent retention fees due to any contractor six months or one year upon practical completion of the project. This is not new to every contractor or client in the construction industry,” George-Kelly said.

According to him, the contractor of the project reported to the bureau that there was a structural defect that must be immediately fixed to avoid further deterioration or risks of incidents.

The bureau chief said they acted expeditiously by giving him the approval to conduct a thorough structural integrity evaluation in liaison with the bureau’s in-house consultants.

He stressed that this could only be done by first sealing off the building, adding that it cannot be in use while the exercise was on.

George-Kelly, therefore, said “It is uncharitable and ungrateful for anyone under the aegis of the NLC to misconstrue this exercise for a product of an imagined imbroglio between labour and government. This is sad!

“It is worthy to mention that the subject matter being discussed was graciously provided for the union, as a result, the cordial relationship that exists between labour and government and I’m not in doubt of the continuity of that cordiality.”
You must log in or register to reply here.
Share: Facebook Twitter Google+ Reddit Pinterest Tumblr WhatsApp Email Link