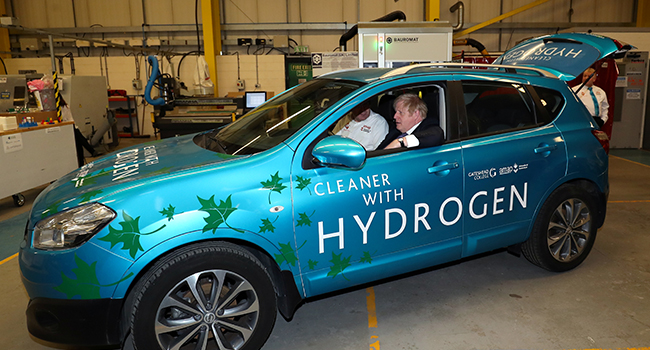 Britain’s Prime Minister Boris Johnson sits in a hydrogen-fuelled prototype car during a visit to The Industry Centre at the University of Sunderland in Sunderland, northeast England, on January 31, 2020. SCOTT HEPPELL / POOL / AFP

Britain will bring forward a ban on sales of new petrol and diesel vehicles to 2035, including hybrids, Prime Minister Boris Johnson was to announce on Tuesday.

Johnson was to make the announcement at an event launching the 2019 United Nations Climate Change conference, COP26, which will be held in Glasgow in November.

The changes bring forward the ban by five years — and now include hybrid vehicles.

Britain has pledged to reduce greenhouse gas emissions to net zero by 2050, with a mixture of cuts and off-setting pollution measures such as planting trees.

“Hosting COP26 is an important opportunity for the UK and nations across the globe to step up in the fight against climate change,” Johnson said.

“As we set out our plans to hit our ambitious 2050 net zero target across this year, so we shall urge others to join us in pledging net zero emissions.

“2020 must be the year we turn the tide on global warming — it will be the year when we choose a cleaner, greener future for all.”

At the COP26 launch event in London, Johnson was to be joined by Italian Prime Minister Giuseppe Conte and naturalist David Attenborough.

Johnson will urge other countries to join Britain in striving towards the 2050 net zero emissions goal through investment in cleaner technology and efforts to protect natural habitats.

“We must question whether we will have a sufficient supply of a full cross-section of zero emissions vehicles in less than 15 years,” he said.