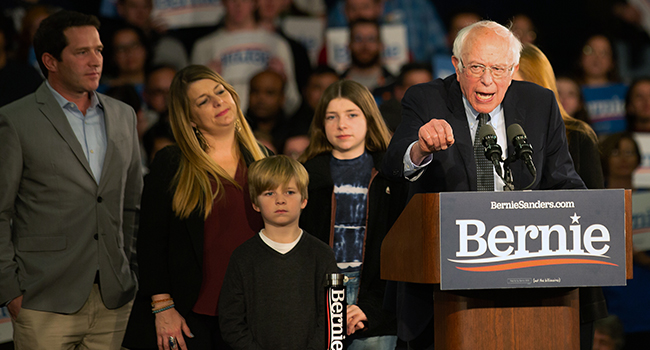 Democratic presidential candidate Vermont Senator Bernie Sanders speaks to supporters as they wait for results to come in at his caucus night watch party on February 3, 2020 in Des Moines, Iowa.
Kerem Yucel / AFP

Senator Bernie Sanders claimed victory in the Iowa caucuses on Monday, citing internal campaign data that placed him ahead of Pete Buttigieg after a major delay to the release of official results.

The first vote of the US election season, Iowa’s caucuses kick off the Democratic primary that will determine who challenges Donald Trump in November.

Data released by the Sanders campaign, which said it represents results from nearly 40 percent of precincts in Iowa, shows the leftist senator garnering 28.62 percent of the vote, followed by moderate Buttigieg on 25.71 percent.

“We recognize that this does not replace the full data from the Iowa Democratic Party, but we believe firmly that our supporters worked too hard for too long to have the results of that work delayed,” Sanders advisor Jeff Weaver said.

The only other candidate polling above 10 percent was Amy Klobuchar, on 10.93.